Setting time goals sucks! That is the biggest take away from today. However, there is a second take away that I can gain and use in the future. I can perform and compete in my age group… In all three disciplines. I don’t excel at any one; however, I am consistent in all three and there is room to grow. 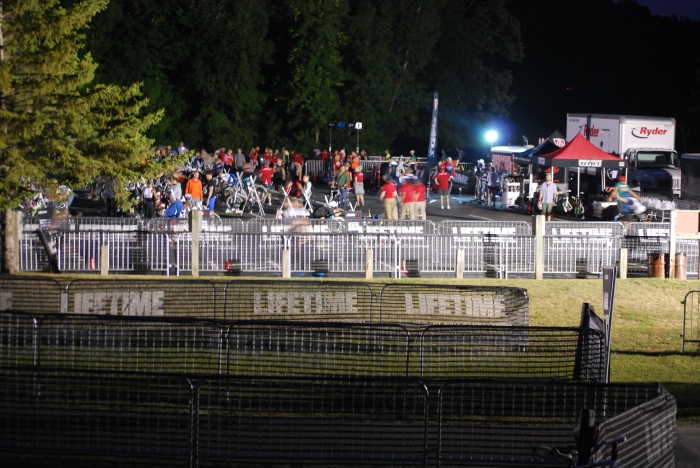 The pre-race: Due to my lack of preparation for the event, Brandi and I ended up waking up in the wee hours of the morning and driving down to Maple Grove. It doesn’t seem like a bad idea as I seldom sleep terribly well the night before a race anyway. However, there may be some lingering fatigue from the lethargy of sitting in the car for 2.75-3.00 hours the morning before the race. We left at 2:00 am after 5 hours of “sleep” to arrive at the athlete parking area at 5:10. There was a lot of activity at that time and we gathered my items and made the half mile walk to Weaver Lake Park.

Weaver Lake Park provides such an excellent venue for a race. Large parking lot for the transition area, a pair of hills to act as key areas for athletes to know about, packet pickup and race control, and a large open area for vendors and expo participants. I made my way up to packet pick-up, got my required documents and descended into the transition area to rack my bike. The racks were laid out by bib number so there was no benefit to arriving early to secure a good spot in transition. After the bike was racked I walked swim in, bike out, bike in, and run out to get a lay of the land. Everything was fair and made sense so I continued to prep. With the access to the water and transition closing 45 minutes before my wave start I made the decision to warm up via a run. I took a light jog around the park to get a little sweat going and then headed back to transition to grab my sandwich (peanut butter and honey on homemade bread), wetsuit, goggles, and swim cap.

The swim: Since this was a self seeded time trial start I decided to seed myself in the back of my wave. I did this for two reason. One was because I would have everyone in front of me and had no worries about where they started and blah blah blah about the final rankings and second, I could swim with the front of the wave that started directly after us. I figured I would have an easier time finding feet with the following age group than it would be to fight members of my own age group for a place at the front of the wave. 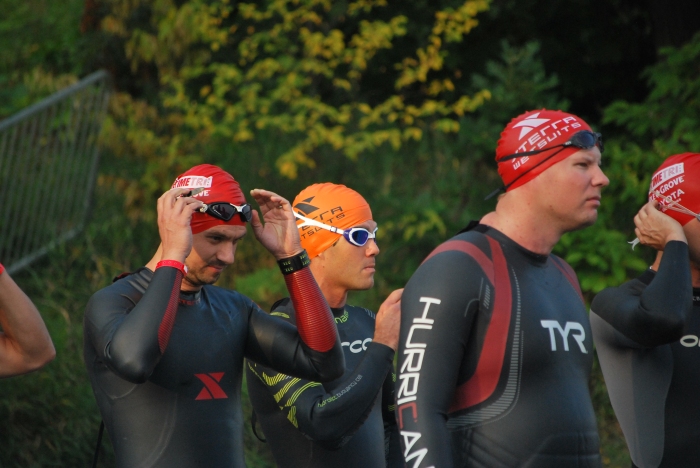 Overall I think it was a smart choice as I was able to pass 5 people on the beach run in and several more before the first turn buoy. The downside of the swim was the first turn buoy, it went right into the sun and was near impossible to sight the next turn buoy. I figure I gave up at least a minute swimming off in the wrong direction. Once I got my bearings I made it to the next turn and headed for shore. It seemed like I was in the water forever. On the way back into shore I got into a little mix up with another swimmer, he was violently zigzagging the course. And one instance he cut me off at a 45° angle. I slowed, went behind him and continued on my way. For my troubles I received a punch to the side about 2 minutes later from the same guy. Thanks a lot random dude! 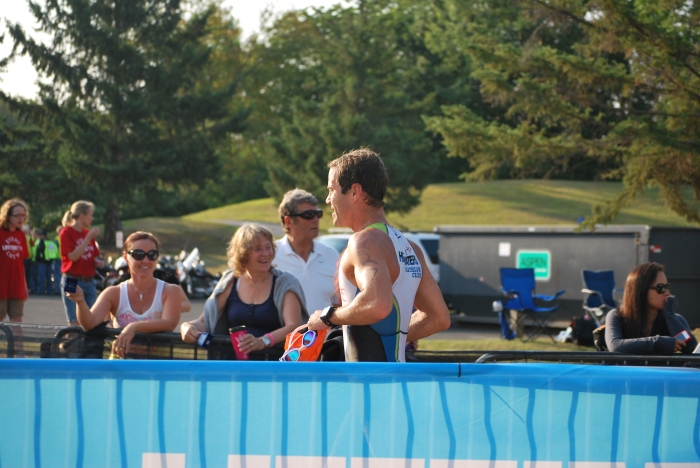 T1: Not certain what to say here other than I stripped my wetsuit almost immediately after exiting the water because I had close to a 300 yard run to my bike. Worked out ok, except my wetsuit was covered in sand which in turn covered my hands in sand.

Bike: Some good, some bad, not a great performance, not completely terrible either. The wind was not favorable today. And while I realize everyone experiences the same thing, I also understand that I love my data. When I see X on the watch I expect to feel like Y. When that doesn’t happen I think, when I think I don’t push like I should, when I don’t push like I should I wake up in a cave of pain with an angry bear… Don’t wake up with an angry bear. I never did see anyone from my age group on the bike. I did see a lot of fast swimmers from the wave behind and slow swimmers from the wave prior. But only once did I see someone with a 35-39 on their leg.

Did I mention the wind. I figure 15 mph sustained out of the south east. Heading south was the best opportunity to make good time going down the hills so it was a bit demoralizing of a bike ride. I did drink 30 ounces of a combination of skratch pineapple, coconut water (not rum:) ), and water throughout the bike and consumed 200 calories. I figured this was as good as I could do. I should make a mental note on these hot days to over consume the hydration if there is any doubt, I can always get rid of the excess.

T2: nothing spectacular or depressing, I just flowed. I did make one mistake and put my hat on before my shoes. It cost me 1 second in the end… But it did not feel right when I did it so I must have learned a rhythm to my transitions.

The run: As a circumstance of the waves, bike courses, etc. I began the run among the sprint people. I started by chuckling when volunteers and people on the road would shout, almost done, only 2 miles to go, I thought, “yeah, this lap.” First lap wasn’t terrible but I could sense trouble brewing. Once again, second race in a row, there was no pop to the running legs. That no pop feeling developed into cramps and tightness. They would move, but not with the same vigor as they normally do. Either I overcooked the bike or my nutrition and hydration strategy failed me. More investigation will be needed will be needed. 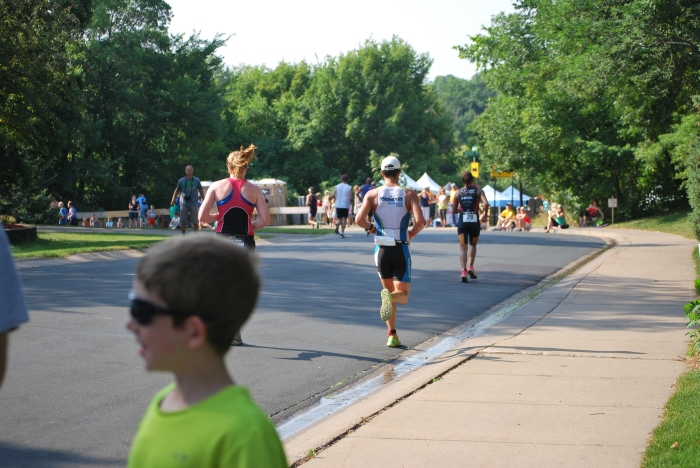 I made it through lap one around 7:00/mile, targeted, 6:45/mile. Second lap is when the meltdown occurred. I told myself to go for it on the second lap. That, “go for it” included walking aid stations and an average pace of 8:00/mile. It was hot and humid by the end of the run and I feel that my hydration leading up to the last 25 minutes may have been questionable.

I did pass a fair number of people throughout the run but still never saw anyone from my age group or wave. 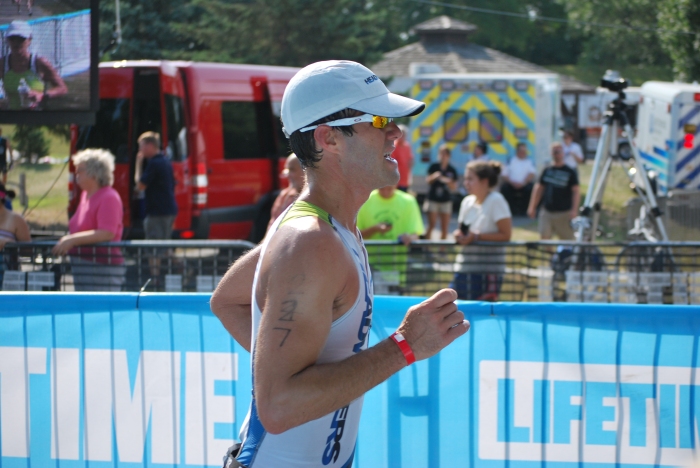 In the end I finished with Jerry MacNeil saying “Matt Backmann from the Headwaters club” and 8th in my age group, top 40 amongst males and top 50 overall, out of 500+ racers. If you would have asked me a week ago if 8th out of 80 was acceptable, I would given an emphatic “yes!” However, with a 2:30+ Olympic Distance race I was needing a little crisis intervention. Luckily my wife is my voice of reason, otherwise I would have sold of all my tri possessions for cash! Eventually that passed after a stop at Izzy’s Ice Cream Shop in St. Paul and a drive past Lake Calhoun, love that place!, and down to Pizzeria Lola on Xerxes in south Minneapolis for a Sweet Italian pizza with a Surly Furious IPA. 24 hours after the fact I realize that I have expectations for myself that can become unmanageable in a race. However, by identifying areas of improvement also gives me and opportunity to improve. Part of that plan is to forget the watch in races, some of them, next year and not be “in tune” with my time but only focus on what my body is telling me.

On to the next adventure… The return to Square Lake Half!