Back to a “home” race. There is just something nice about being home before the race.

The day started off like most race mornings, wake-up, eat (small bowl of granola and Almond Milk), and realize it is 2:30 am; go back to bed. Wake-up the second time, this time for real, have two eggs on toast, get dressed, finish packing the bags with all the important race day nutrition and fluid, load up the car, and head off to the race. 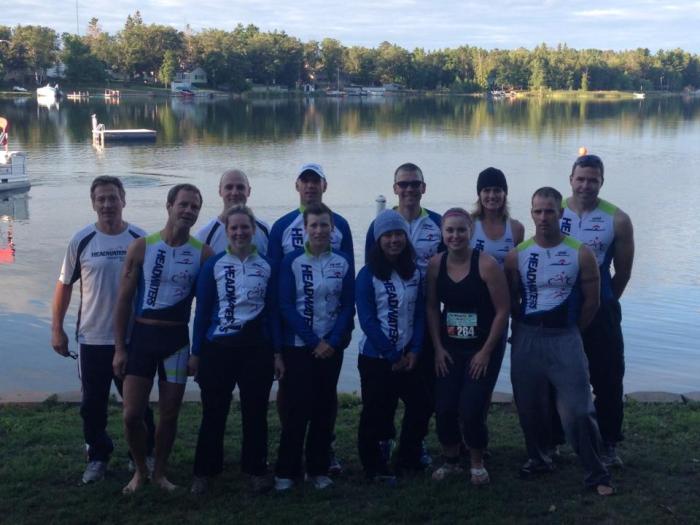 Got my transition area set up right next to my wife; it works well for us as I am out on the bike when she gets out of the water, and she is on the bike when I am in T2. With only an hour and a half left until the race meeting I decided to walk around, talk to fellow members of Headwaters Tri and other races… And headed back to the car for the tire pump. (I know what I am getting Sandi for Christmas J). Did a quick walk/run that was more dynamic stretching than anything just to get everything loosened up followed by a quick ride to check the bike and get it in the right gear. Put on the wet suit and was ready to go.

The swim was so much different than Door County, So quick, so few bodies. I tailed somebody’s feet throughout the entire course and worked to push the pace as much as I could. I saw David Lewis to my left until the last turn buoy where I think I cut him off. He was on my feet the whole way back and ran out of the water just ahead of me… Nice Dolphin Dives. 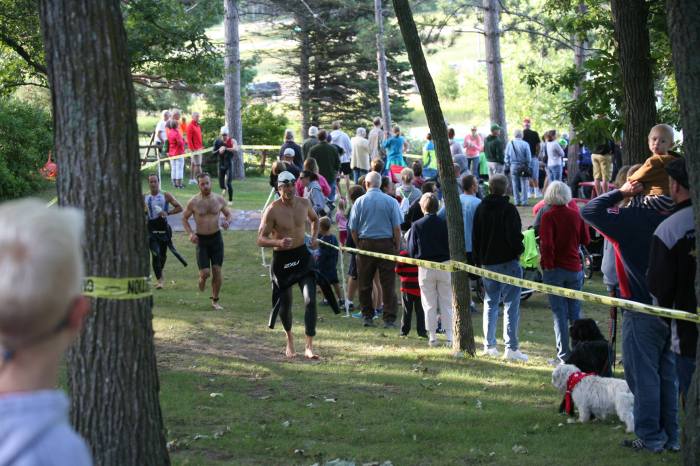 Not much, I didn’t fall, trip, or stubble with anything… Oh I did beat Mr. Lewis out of T1 after his heroic sprint up the hill. 1:20

Ran up the hill past the bike mount line so I would not end up on my face attempting to mount the bike up hill. Settled into the shoes and started pedaling. Went to take a drink of my beloved coconut water and it was still semi-solid, in a partially frozen state from the night before. I was able to get a little bit out and figured I would address it later, like when I was thirsty again.

I remember passing a few people on Hwy 18 and only being passed by one person. Throughout the ride there was always someone I could see and caught a few people. One other person passed me toward the end of the bike but it seemed like a solid effort. Watch told me a 23 mph average and that was confirmed with my 36:36 time. The water did eventually thaw by mile 7 so I got a little bit of fluid in me.

T2: Once again, not much to say, I didn’t dismount poorly, I trotted down my aisle and took note that my wife’s bike was gone so I knew she survived the swim. I put on my shoes, grabbed my race belt, hat, and headed out.

I’ve been fairly happy with my run all year, not great but better than terrible. I ended up making ground and catching a few more people on the run. It is such a good feeling to run well. I made it to the turn around and did not notice a large number of people in front of me or directly behind. It somewhat went into auto-pilot at the point and I headed toward the line.

Generally it was a good race. I was 9th overall, 5/27 in my age group, and most importantly, almost 2:00 faster than 2012. I was shooting for 1:05 but the legs did not have any pop to them. They felt strong, but the lack of dedicated speed work is likely catching up with me. Well, it was likely the last sprint race of the year so I may need to save speed work til next spring.